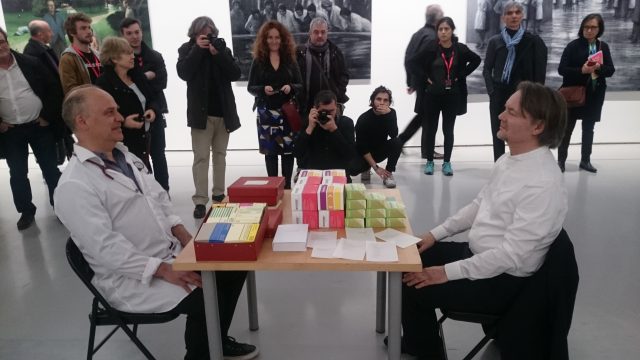 Morten Søndergaard, consulting me with his word-drugstore at my opening RAVAGE in Musée d’Art Moderne, Saint-Etienne.

The beech is blooming green here at Tasilik, my workplace in Odsherred!

I am thoughtful after some very busy months working with my portrait exhibition for Frederiksborg Castle, which opened January 12th. The exhibition ended on April 2, and had many visitors, about 20,000 guests.

There was a lot of interest in the paintings, representing 40 years of my life. It was great to meet many of the models that I had not seen for years. Each portrait contains a story, and in my mind I was moved by being so privileged to have the opportunity to see my life in this way with the people I have met and exchanged thoughts with in different periods of my life.

However, it was very tragic that Peter Bastian, whom I painted in January 2016 while he was seriously ill, but later declared cured when he arrived at the opening at Frederiksborg Castle on January 12, 2017, and shared his wonderful music with us – died just 2 months later! He was a person, I’m grateful to have had the opportunity to be with the two days it took to paint the portrait. Even though we had never met before, the conversation went on intensely, and after the first day’s 10 hours of painting, (he stood for about 20 minutes at a time -about as long as a vinyl LP takes before turning), we had dinner, and then continued in the armchairs in front of the fireplace + a bottle of Brandy, where we outlined the consequences of Einstein’s theory of relativity in the perspective that the component of the soul is light ..

I must admit that the fact that he is dead makes me very sad. But through his life he showed such a passion and curiosity about life, philosophy, and the universe, that I’m sure he has met his destiny courageously – like a new adventure. He was a completely unique, loving person!

The new Carlsberg Foundation bought the portrait of Peter Bastian and also my 12 portraits of the crew on the inspection ship Ejnar Mikkelsen, which I painted while sailing in Greenland waters in April 2015.

On March 10, 2017, my big exhibition opened at the Musée d’Art Modern Saint-Etienne Metropole in France. Works from the last 20 years are shown. Paintings, drawings and videos. My exhibition was one in 3 that opened that day. The other exhibitions were the design biennial, and the Spanish sculptor Jaume Plensa.

During the opening hours, when museum director Martine Dancer was to introduce my works, she just mentioned my name, after which a big projector who was lighting up the scene exploded with a blast! It was railing down with glowing hot glass slices over us standing on stage and where they landed on the rubber mats we stood on, small smoke columns rose between us, which included us in a diabolical performance. I had the feeling that my dear late colleague Preben Fjederholt would mark his presence for me on this important day. My good friend, the author Morten Søndergaard, made a performance with his ‘word-drugstore’, translated into French. And many good friends and supporters met up to the opening. The exhibition catalog is yet not finished, but the exhibition lasts until 27 August, and therefore it is acceptable that it appears a little later. The catalog contains 168 pages, and is published by the German publisher Kerber very soon. With texts by Jens Christian Grøndahl, Merete Sanderhoff, Lorand Hegyi and Martine Dancer. On April 13, I was back in the museum, where an evening was arranged around my works. A panel consisting of the museum leader Martine Dancer, the Rector of the Academy of Fine Arts and I reviewed a number of selected works, including my inspiration sources, Wilhelm Hammershøi, Francis Bacon and Lucian Freud.

One of the other days I was at the art academy in the city of Saint-Etienne to review 6 students’ works at the Art Academy. It was an inspiring experience. It was good to see that there is still passion for painting. The young people were lighted and gifted.